Who is Garry de Castro?

Garry de Castro is the person behind Financial Planning PH. 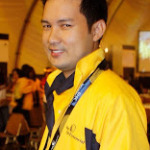 As you can read in his blog’s about page, Garry was an ordinary IT guy but upon hearing several financial seminars decided to be an advocate of financial literacy thus the need to spread all that he learned about financial planning. At first his advocacy was just a sideline until an invitation from insurance companies and a guest appearance in a TV show started it all.

From just a sideline now together with his team they conduct financial planning seminars.

Listen to his insights and other discussions this coming August 17, 2013 at the upcoming OVERHAUL!The Stock Market Strategy 2013. ← The Philippine President’s SONA(State of the Nation Address) 2013
Investing Word of the Day: Bonds →