In a few hours a lot of things happen and one of those is the US government shut down. 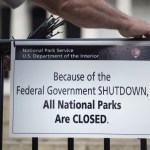 A it got scared and some has been expecting it and don’t really think it is the big issue because according to US history such has already happen in the past several times but what is a shutdown and why all the chaos?

I read an article in Washington Post(click here for the article) that explains much of it. Basically what happened is the US Federal government is “closed until further notice” due to the disagreement between its two legislative bodies(the congress and the senate)on how will the government spend for the fiscal year 2014. It means they have no approved budget thus everyone has to halt because money has not yet been allocated for any of the government’s agencies to operate.

As the article said in a sense there is a “shutdown” because agencies wont be able to pay for employees’ payroll and other operating expenses since their budget has not yet been given. Some are still operating on their emergency and extra funds and the question is how long will such last. The longest in record was 21 days. If such situation drags longer the US economy will be affected since spending is halted and other operation which could have generated revenue for the government and local business is stop.

One article in Philippine Star(click here to read the article) said that the Philippine economy will be impacted with the shutdown because of the slow down in export between the our countries and other countries if such prolongs. On the other hand Arsenio Balisacan, NEDA director general, said that such will have little effect in the financial market since such was already absorbed unless in drags(from http://www.gmanetwork.com).

Yesterday the market was up probably due to some investors shifting back to Asia with the uncertainty in the US. With that we have to closely monitor the situation so that we can prepare for a possible buying and selling opportunities. Aside from the US shutdown, the US is again nearing its debt ceiling and thus if such shutdown is not resolve the impending breach of debt ceiling might complicate such situation.

← Be thankful, be generous
Bad Investments From Being Emotional →