0saves
Save
Email
Print
source: http://www.aboitizpower.com
AboitizPower is mainly a hydroelectric power generating company. Its subsidiaries comprise mostly of power distributors in the Visayas and Mindanao region and  hydroelectric plants in the Northern Luzon area.
Below is AboitizPower’s structure:
The Aboitiz group are the major stakeholder.
AboitizPower‘s price growth has been phenomenal starting at around 4 pesos in January 2009 and closing at the 30 pesos level to date.
AboitizPower has allotted around 49 billion pesos for 2011 CAPEX(Capital Expenditure) for the Subic and Davao coal fired plants. (to read more on this click here)
Fundamentally AboitizPower , just like other utility corporation,  is banking on CAPEX to be able to generate revenues thus a big portion of funding comes from borrowing. Having a Current ratio of 2.58 which is very ok but with a Debt-to-Equity ratio of around 1.33 due to massive borrowing for expansion and rehabilitation projects of which the benefit will be realize in the next 2-5 years. A notable increase of revenue from power generation was the noted in 2010 as compared to 2009(source AP FY2010 Financial and Operating Performance)
In my opinion AboitizPower(AP) is good stock and a must buy while it is at a low level. Though when one looks at the 10 yr range it seems that its growth slowed down in mid-2010 to 2011 after almost 2 years of growth. 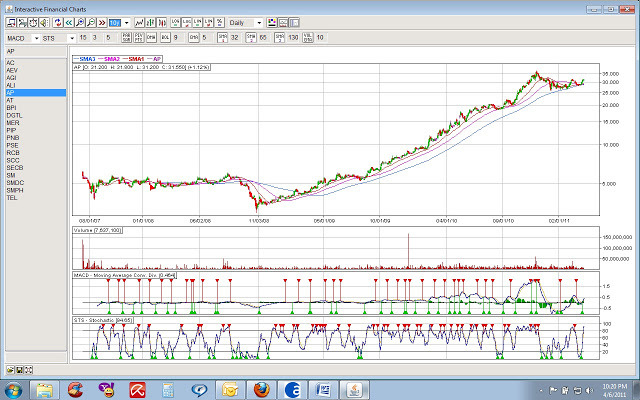 On a year range Stochastic indicate a sudden rise and could possibly indicate an overbought level.  Thus a good time to buy since price might go down in the next couple of weeks. 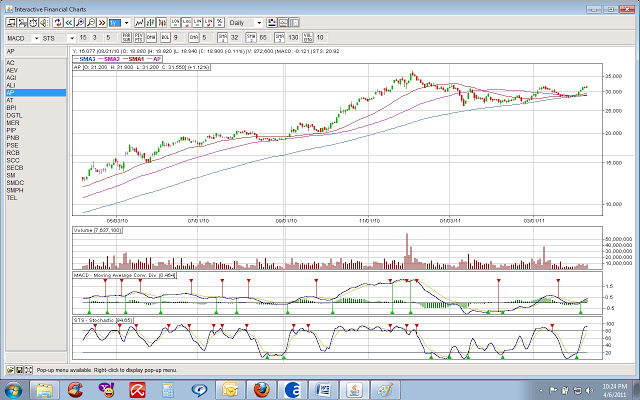